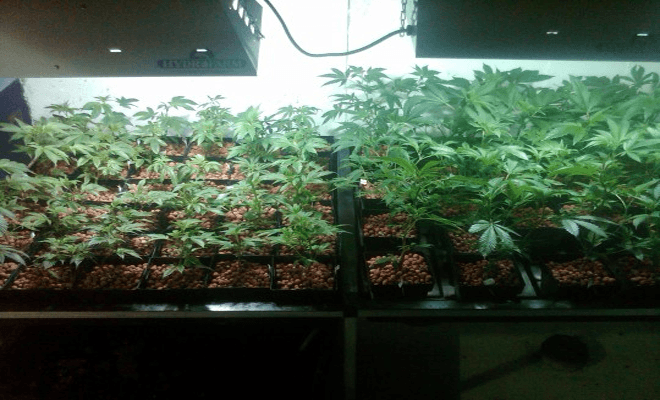 Each Growing Medium for Hydroponic Marijuana Cultivation is unique in its own way. This page is designed to teach you the meanings and definitions of hydroponic growing mediums.

These are the mediums that can be sterilized and reused when growing in hydroponics:

Expanded Clay – also called hydroclay, hydroton or hydrocorn, are small clay pellets that are cooked at high temperatures in a kiln until they expand. Many little catacomb-like pockets form inside each pellet that holds air and nutrient solution. I prefer to use expanded clay pellets when growing my mother plants in large containers. It drains very well yet still retains plenty of nutrients and oxygen. Some of the most common names in expanded clay are Hydroton, Leca, Grorox, Geolite. Always make sure to wash new rocks prior to their first use due to major amounts of dust that turn into a mud-like substance which can damage your nutrient solution, the roots and the water pump.

Expanded Mica – Very similar to Expanded Clay. Works the same as clay pellets, but from my experience, seems to be much more expensive to purchase.

Gravel – gravel was one of the first mediums ever used in hydroponic growing. Its very heavy in weight but very inert and holds plenty of of air, drains well, and is very inexpensive. Its near impossible to over water when using gravel. Always pre-soak and adjust the pH level prior to using gravel.

Water – although some people prefer to use water alone, it is a very poor medium to grow in because it cannot hold enough oxygen to support plant life. When aerated, water becomes a good growing medium.

Air – air is a great growing medium when it is filled with 100% humidity 24 hours a day. Otherwise its not wise to use by itself.

Foam – is not a very popular way to grow in hydroponics. It is very easy to clean and lasts a long time but overall not my preferred medium to grow in.

Pumice – is a naturally occurring, porous, lightweight, volcanic rock that holds moisture and air in catacomb-like surfaces. Light and easy to work with, some lava rock is so light it floats. Be careful that the sharp edges on the rocks do not damage the the roots on the plant. Lava rock is a great medium, only next to hydroclay.

These hydroponic growing mediums are meant to be used one time then thrown away in the trash. They will lose their shape and structure if sterilized.

Coconut Fiber – using coconut fiber as a medium for growing is an excellent choice. Coco Fiber is an excellent way to increase the water absorbing power of potting soil, while also protecting against harmful bacteria and promoting organic farming. These coco fiber soil amendments are widely used for hydroponics, soil mixes, and container planting. Coco Pith (also known as Coir) is a natural byproduct of coconut plantations. It’s a renewable resource with several advantages over peat moss. It holds water without any additives, and absorbs water evenly without any beading on the surface. Coir also has more nutrients, a neutral pH balance, and remains effective for up to 5 years.

Perlite – drains fast, but is very light and tends to float when flooded with water. Perlite has no buffering capacity and is best used to aerate soil or soilless mix.

Rockwool – is by far the most widely used growing medium and my favorite. It is an inert, sterile, porous, non-degradable growing medium that provides firm root support. Rockwool has the ability to hold water and air for the roots. The roots are able to draw in most of the water stored in the rockwool, but it has no buffering capacity and a high pH. Rockwool is probably the most popular hydroponic growing medium in the world. The most popular brands and manufacturers of rockwool are grodan, HydroGro and Vacrok.

Sand – is very heavy and has no buffering ability. Some sand has a high pH. Make sure to use sharp river sand. Do not use ocean or salty beach sand. Sand is best used as a soil amendment in volumes of less than 10%.

Sawdust – holds too much water for marijuana growth and is usually too acidic. Be wary of soils with too much wood matter. Such mediums use available nitrogen to decompose the leglin in the wood.

Vermiculite – holds a lot of water and is best suited for clones when it is mixed with sand or perlite. With excellent buffering qualities, vermiculite holds lots of water and has traces of magnesium (Mg), phosphorus (P), aluminum (Al), and silicon (Si). Do not use construction grade vermiculite which is treated with phytotoxic chemicals.

Cannabutter: How to make Weed Butter for Edibles7K Total Shares

How to make Weed-Infused CannaGummies in 5 easy-to-follow steps.1K Total Shares