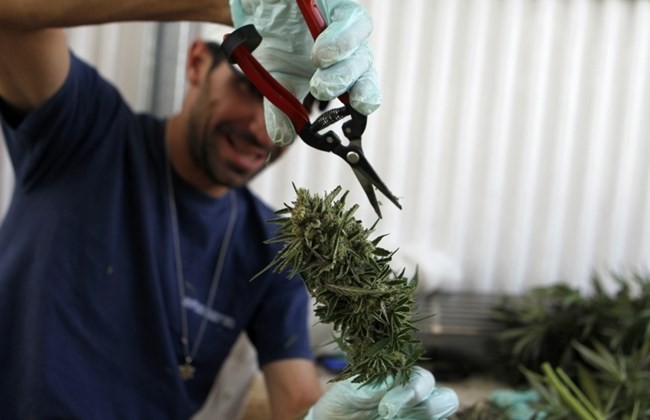 They  grow in a secret location in northern Israel. A tall fence, security cameras and an armed guard protect them from criminals. A hint of their sweet-scented blossom carries in the air: rows and rows of cannabis plants, as far as the eye can see.

It is here, at a medical marijuana plantation atop the hills of the Galilee, where researchers say they have developed marijuana that can be used to ease the symptoms of some ailments without getting patients high.

“Sometimes the high is not always what they need. Sometimes it is an unwanted side effect. For some of the people it’s not even pleasant,” said Zack Klein, head of development at Tikun Olam, the company that developed the plant.

Cannabis has more than 60 constituents called cannabinoids. THC is perhaps the best known of those, less so for its medical benefits and more for its psychoactive properties that give people a “high” feeling.

But cannabis also contains Cannabidiol, or CBD, a substance that some researchers say has anti-inflammatory benefits. Unlike THC, it hardly binds to the brain’s receptors and can therefore work without getting patients stoned.

“CBD plants are available in different forms all over the world,” said Klein, adding that the company’s plant is free of THC and very high in CBD.

Tikun Olam began its research on CBD enhanced cannabis in 2009 and about six months ago they came up with Avidekel, Klein said, a cannabis strain that contains 15.8 percent CBD and only traces of THC, less than one percent.

Marijuana is an illegal drug in Israel. Medicinal use of it was first permitted in 1993, according to the health ministry.

Today cannabis is used in Israel to treat 9,000 people suffering from illnesses such as cancer, Parkinson’s, multiple sclerosis, Crohn’s disease and post traumatic stress disorder, according to Israel’s health ministry.

Drug companies have also been interested in cannabis as a medicine. Britain’s GW Pharmaceuticals, with Bayer and Almirall, sells an under-the-tongue spray called Sativex that is designed to minimize highs by manipulating ratios of active ingredients.

Raphael Mechoulam, a professor of medicinal chemistry at the Hebrew University in Jerusalem, said Avidekel is thought to be the first CBD-enriched cannabis plant with no THC to have been developed in Israel.

“It is possible that (Avidekel’s) CBD to THC ratio is the highest among medical marijuana companies in the world, but the industry is not very organized, so one cannot keep exact track of what each company is doing,” he explained.

Although there have been no clinical trials in humans, Mechoulam, who is a leading researcher of cannabinoids, said that Avidekel showed promise as a potent anti-inflammatory.

Ruth Gallily of the Hebrew University who works for the company and has been studying CBD for more than 12 years, said she has found that the substance has impressive anti-inflammatory qualities. She has been testing the effects of Tikun Olam’s CBD-enhanced cannabis on mice and expects clinical trials to begin in a few months.

Avidekel is a new strain of a plant that is already permitted for medical use so there is nothing stopping patients who are already being treated with marijuana from trying Avidekel. About 10 patients began using it in the past six months, Klein said.

read the entire story at newsdaily.com

Cannabutter: How to make Weed Butter for Edibles789 Total Shares