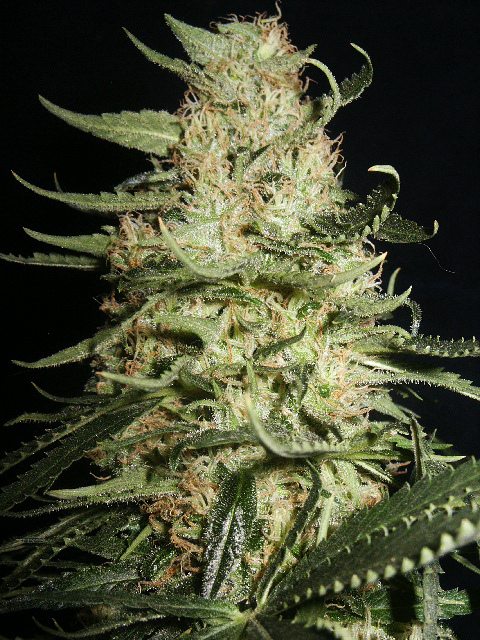 Appearance: (7.5/10) An abnormally dark green for a high percentage Sativa like this, the Mother’s Finest was nicely dense and had a copious layer of trichomes all over it with brownish-orange pistils. While it didn’t necessarily “wow” us, it was a very solid-looking sample with no flaws to be seen in the grow/harvest that made us excited to try it.

Aroma: (9/10) Wow, this one is one of our new favorites smell-wise, as it had a pretty amazing lemon-lime Haze smell with a combination of chemical pine and menthol bite in the background. Though it won’t exactly smack you in the face with its aroma, it was rather pungent when ground and just extremely enjoyable and aromatic. If you love a Hazey citrus smell, this one will curl your toes a bit and take you to a happy place.

Taste: (6.5/10) More than a little disappointing after the mouth-watering aroma, the taste was nicely sweet, with a little bit of a “green” and herby taste to it, but it went downhill quick and was never really all that pungent to begin with. The real issue though was the level or harshness, which made our reviewers cough more than normal, and the coughing continued for a while after finishing the sample. However, it burned to a nicely clean white-gray ash, so it didn’t appear to be a flush issue.

Effects: While one reviewer reported a 15 minute “creeper” effect, there were no disagreements about the initial effects — this strain is very heady in every sense of the word, with pockets of pressure developing in the cheeks, a strong spacey feeling (literally staring off into space at times), warmth coursing through the head and body, and a slightly energetic feeling. However, since the head effects were so overwhelming, the body wasn’t thought about much until later in the duration when the head pressure had died down a bit… Once that happened, it gave way to a more relaxed and mood-enhancing state with a little residual mental fuzziness.

Medicinal Traits: (We are NOT doctors – personal opinion ONLY) General relaxation, eventually… No clear aspects of relief… it didn’t really kill pain, wasn’t a Sativa energy boost beyond 15 minutes, and had those semi-uncomfortable pockets of pressure that weren’t particularly enjoyable. It was relaxing and mood elevating as it went on, but beyond that, it was hard to call.

Overall: This strain was interesting because it carried such an amazing smell but was sort of ho-hum in other areas. The effects were certainly strong and not lacking potency, but they were sort of disjointed and hard to nail down, especially in terms of medicinal qualities. It’s one of those strains that might catch up to you if the dosage is too high, but at lower levels, it would be nice for most patients as a general as long as they don’t mind the face pressure weirdness. It took us to a good place after about an hour, but the initial effects were a little strange and not particularly enjoyable… clean finish though with the highest level of enjoyment probably coming around 1:30 – 2:00 in.