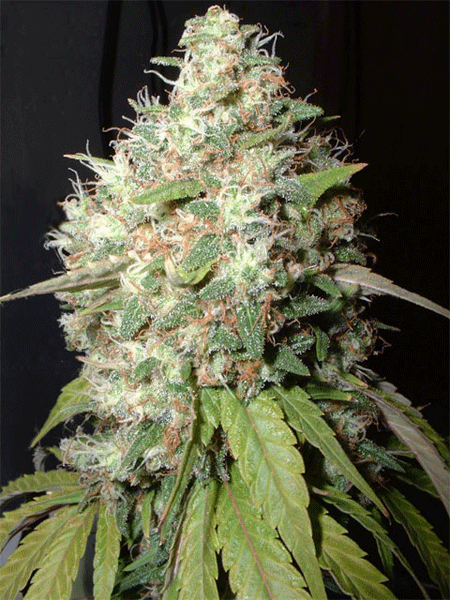 Despite it’s aggressive name, AK-47 has many peaceful tendencies. First bred in 1992, the name suggests the power packed in its dark, resinous, compact buds that bristle with red hairs and glistening trichomes. AK-47 has a spiced aroma bordering on skunk, with a hint of sandalwood, but tastes sweeter and more floral than the smell would lead one to expect.

AK has mostly sativa characteristics with one exception: a quick finishing time. The variety was reworked in 1999 to increase stability, so results from seeds are uniform. A tall plant with substantial girth and big fat calyxes, she performs excellently in indoor environments, both soil and hydro, and has been grown outdoors with good results. In low to medium temperatures, this variety produces a denser bud; in high temperatures buds are fluffier and more open, but total yields are roughly equivalent.

The AK-47 buzz is immediate and long lasting with an alert but mellow cerebral effect. Lab tests have rated the THC content at over 20 percent, making it a “one hit wonder” for many smokers. This variety can be a little spacey, but is great for playing and listening to music, or other social activities. AK-47 helped put Serious Seeds on the map with a 2nd place finish in the hydroponics competition and a 3rd place in the overall category at the 1995 Cannabis Cup in the Netherlands.