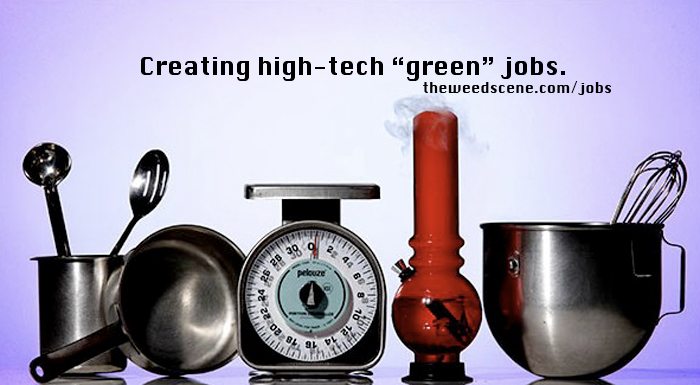 Now that marijuana has become legal in Washington and Colorado for recreational use the boom in Cannabis Careers has become a very hot topic. Medical Marijuana is also legal in 18 states which has also been a large contributor to the marijuana job market and careers in cannabis growing, marijuana dispensaries, grow supply stores and grow warehouses just to name a few of the opportunities to work a marijuana job in the cannabis industries leading market place.

Marijuana growing jobs are in very high demand these days as it really is a dream come true for most cannabis cultivators that have been on the underground scene for many years. Now weed farmers have the opportunity to grow marijuana legally in Colorado, Washington, Michigan, Alaska, Arizona, California, Connecticut, Washington DC, Delaware, Hawaii, Maine, Massachusetts, Montana, Nevada, New Jersey, New Mexico, Oregon, Rhode Island and Vermont. In Colorado and Washington the legalization of marijuana for recreational use has created a boom or a “gold rush” which has created new jobs and careers in marijuana growing, warehouse cannabis cultivation, indoor basement grow rooms, greenhouse growing and much more which has also created a large demand for quality individuals to work these operations, considering them their new career in cannabis cultivation. As the job market has continued to decline, the marijuana job industry has just started to boom, and is expected to employ at least 4000 new people in Colorado alone this year. Thats 4000 new jobs and careers working with cannabis and growing medical marijuana. Now is the time to get in, if you snooze you loose!

Finding the right job in the marijuana business is not an easy task. Its all about knowing people and networking with the right group of cannabis growers, dispensary owners, marijuana doctors and lawyers along with any other marijuana business owner. Since most of these people are too busy to interview potential employees to their marijuana business, the best way to get in is to meet as many people as you can in the shortest time possible. The Weed Scene has created a way to do this. We have created the Colorado Cannabis Convention and Job Fair which will be a meeting place for over 40,000 people, vendors, sponsors, employers and anyone else related to the cannabis industry to talk business, introduce themselves and most importantly, Apply for jobs working with marijuana. This Marijuana job fair will be the first of its kind in Colorado and hoping to spread to every other state that has legalized the use of marijuana. Unless you want to locate all the marijuana businesses that are listed and drive to each one of them, hoping to talk to someone about a job, then you really should consider attending the Cannabis Convention & Job Fair. This is the ONLY way to meet the people that you cannot do on your own. Cannabis Careers will be a booming economical genre for a while so now is the time to find your dream job growing marijuana or just working a job in the cannabis industry.